One of Our Most Important Events!

The Vhi Women's Mini Marathon, an annual 10k charity road race, occurs each June bank holiday weekend in Dublin and is the largest Women's event of its kind in the world.

In 1983, the inaugural event had 9,000 women entering and the event reached a record attendance in 2014 with 41,006 women taking part. The event has grown in popularity as women have taken more interest in their own health and fitness. A staggering 1 million women have entered the event over its 36 years.

Camphill are promoting the Woman's Mini Marathon again this year, on Bank Holiday Sunday 2nd of June at 2pm as a great opportunity for every Community to raise money through sponsorship of runners, and to have a fun day out in Dublin and at the Sandymount Hotel. This event is the major fundraiser for charities in Ireland each year with over 40,000 women taking part and €10m raised annually, and Camphill should be getting its share!

The news that Ann Sheehan and Marie Keane and a team from the National Office are participating in June should provide great impetus for more Communities, families and staff to engage.

Register for the Mini Marathon Here 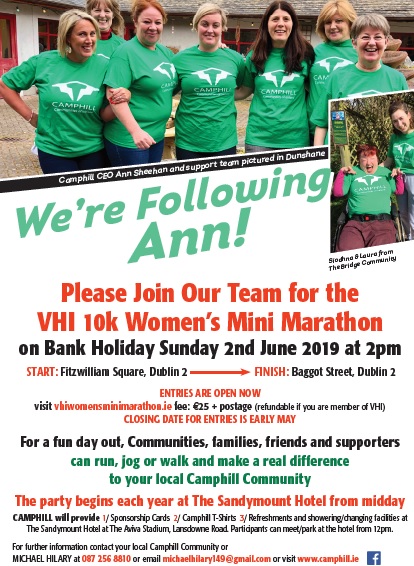